For over three decades, from 1934 to 1972, New Haven’s J. Edward Slavin was bent on deterring youth at risk from a life of crime. Slavin envisioned a home where troubled boys could live, work, and learn as a way to redirect their energies away from a life of crime. He drew inspiration from the success of a residential program in Nebraska founded by Father Edward J. Flanagan in 1917 which would grow into a fully functioning community known as Boys Town. 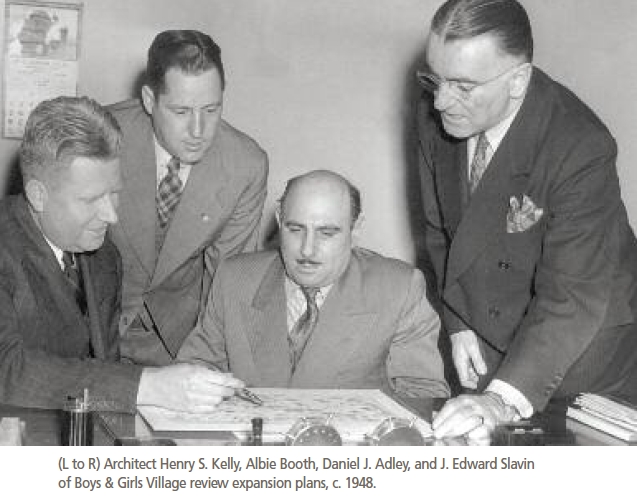 Serving as the first president of Boys Village, his version of Boys Town, Slavin surrounded himself with people who could help fulfill his dream. The board of directors was composed of successful men from diverse fields, including William F. Hayes, former chief jailer for New Haven County, as vice president, Yale football legend Albert “Albie” Booth as treasurer, and home builder Peter Juliano as secretary. Other members of the board included Stanley Komykowski, a prominent 4-H member who worked for the U.S. Department of Agriculture, and trucking company magnate and former New Haven Police Commissioner Daniel J. Adley.

In 1941 Slavin and his associates acquired 82 acres off Wheelers Farms Road in Milford. Boys Village was established the following year, and its doors opened in 1944. It initially operated as a summer camp and became a year-round facility in 1947. With a 14-room farmhouse, small cottage, cornfield, potato patch, dairy barn, and poultry buildings, it was originally designed to accommodate 16 boys who were 10 years old and older.

Patterned after a New England village, it offered communal living, educational and training facilities for industry and farming, and a psychological clinic. The boys grew most of the food they ate and were responsible for performing chores around the facility. In 1948 the board of directors made plans to accommodate a total of 31 boys. 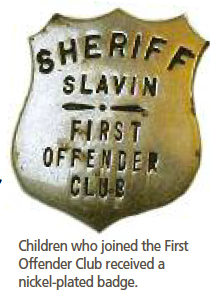 “I really believe all boys have good in them if they are shown the right way. I always believed that if you keep a boy busy he won’t get into trouble. I’m not interested in how much it costs to grow a boy. I’m interested in what kind of boy he’ll make.” - J. Edward Slavin

Slavin’s strategies to reach young people early—beginning with his radio show and First Offender Club—were visionary. He expanded his reach with a screenplay for a film called First Offenders, produced in 1939, with the tagline, “Stop turning kids without a chance into men without hope!” The movie, released nationally by Columbia Pictures, was directed by Frank McDonald and starred Walter Abel and Beverly Roberts. Slavin also published several comic books in 1945 under the banner Courage Comics and the auspices of Boys Village. The theme of the stories was courage in the face of adversity; the comics featured scenarios relating to crime, athletics, and heroism in World War II.

Read more on the formative years of the Boys & Girls Village

Expanding to include girls

Over the years, Boys Village has continued to seek ways to serve children with emotional and behavioral needs.

As a leader in specialized care and education for the emotionally troubled youngster, Boys & Girls Village is committed to continuing the tradition begun by our founders of providing warmth, guidance, and life-training for children at risk of being forgotten.